Murudeshwar is a quiet, beautiful town located in the Coastal Karnataka between Goa and Udupi. Murudeshwar has a railway station on the picturesque Mumbai-Mangalore Konkan Railway line. Trains from Udupi take 2-21/2 hours to reach Murudeshwar. The railway station is just 2 km east of the town and can be reached by buses and auto-rickshaws. The rickshaw-wallahs charge Rs.30 to travel between the temple and railway station.

The Town is around 1 km off the Kochi-Mumbai (NH17) highway. The town can be reached by road from Udupi and Mangalore from South or Goa and Mumbai from North. The roads are in excellent conditions and run adjacent to the Arabian Sea and pass through lot of rivers, small hills and beautiful beaches. Frequent buses are available from Udupi. The travel takes around 3 hours. However the Karnataka state buses are not the best if you are carrying a lot of luggage. From the highway, one can either walk or take an auto-rickshaw to reach the temple.

The Shiva temple is built on the Kanduka hill and is surrounded by Arabian Sea on three sides. The temple complex has the world’s second tallest Shiva statue. The temple has one of the tallest gopurams in India. The gopuram has lift facilities to reach up to 18 of the 20 stories. The view from the top of the gopuram is majestic. However the views are clear and photographic in early morning and late evening.

Murudeshwar beach is very tidy and calm. The shallow beach with array of small waves provides ideal condition for swimming and water sports. It is a good place to spend time with family and friends. It has good facilities for tourists. The town has good number of hotels and restaurants located close to the temple and railway station.

The RNS guest house located adjacent to the temple complex provides the best facilities in the town. And the Naveen Beach restaurant located close the beach offers best view of the Arabian Sea while dining. It serves South and North Indian food. But the food is not very tasty to those coming from big towns. The town management keeps the town very clean and friendly to the visitors. It is a good place to spend a weekend. 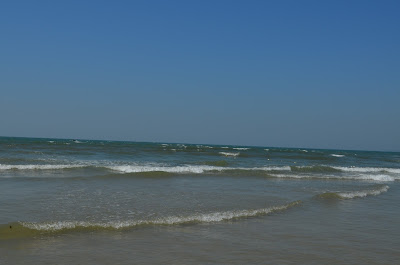 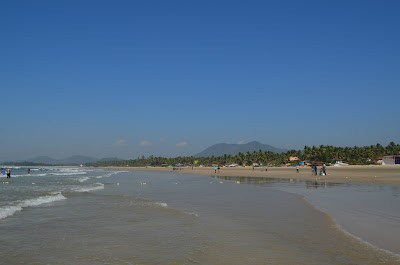 And there are lot of wonderful places located close to Murudeshwar like Gokarna, Jog Falls, Kollur, Malpe beach and Udupi.

Posted by Bharatheeraj at 12:24 PM No comments:

Udupi- a lovely temple town situated in Coastal Karnataka, next to Mangalore.

Udupi is famous for Sri Krishna Temple and Udupi cuisine. It’s a peaceful town with activities revolving around the Krishna Temple. All Hindu festivals are celebrated grandly in Sri Krishna Mutt. Thus the mutt is full of activities all round the year. Thousands of pilgrims visit the temple to get blessings of Lord Krishna every day. We visited Udupi in January right after Rathotsavam or Car Festival. And the temple is full of pilgrims. One could find groups of Russians, Germans and other Europeans chanting, "Hare Krishna Hare Krishna, Krishna Krishna Hare Hare, Hare Rama Hare Rama, Rama Rama Hare Hare" and playing musical instruments in the temple streets of Udupi in the evenings. Such scenes are common during festival days and other auspicious days to Krishna.

The town has all the amenities required by guests. A tourist town since many decades, it has been developed to serve the needs of visitors. The hotels and restaurants’ staff  behave well with visitors. We felt welcome everywhere. Also it is a district headquarters and serves as home to some of India’s largest banks. So there were busy markets and shopping places around.

Manipal lies close to Udupi with lot of educational institutes and hospitals. Udupi railway station is located between Manipal and Udupi. Udupi is in the tail end of Konkan railway line that connects Mangalore with Mumbai. The rail routes through mountains, water falls, large tunnels, river bridges and runs parallel to the Arabian Sea.

Manipal is developed with the large and diverse student population in mind. One can get to shop all the brands and eat at all international food chain outlets in Manipal. Manipal also has numerous restaurants serving Indian to American and provides decent night life. End point in Manipal behind KMC medical college is an excellent place to visit during sunset.

Udupi has an excellent public transportation. Long distance buses to Kollur, Murudeswar, Mangalore, Sringeri etc., can be taken from Service Bus station. And the town bus stand located next to service station connects the city with all its suburbs like Malpe.

The town has a long coastline nearby and beautiful beaches in Malpe and Kaup. Of both, Malpe is famous among tourists. Malpe beach is around 10 km from Udupi and can be reached by town buses plying frequently. Kaup beach has a beautiful light house close by.

Unlike other Indian beaches, the beaches in Karnataka are clean and maintained well and provide good ambience to the visitors.

One can take a boat ride to St Mary's Island during non-monsoon months and enjoy the rocky island full of coconut trees.

The famous Jain temple with large Bahubali statue is located in Karkala, an hour by road drive from Udupi. Journey to Udupi is incomplete without dining at Woodlands Restaurant or Mitra Samaj.
Mitra Samaj is located close to the temple in the car street and serves authentic Udupi cuisine.
Woodlands Restaurant serves south and north Indian dishes in addition to Udupi special dishes.

We chose to dine at Woodlands. And we were more than satisfied with the food and service. It’s an A/C restaurant located within a walk-able distance from the temple. The restaurant was filled with multi-cultural people with locals, Indian tourists and Foreigners experiencing the delicious food served.

We had Udupi bun (banana bun), idly,  butter naan, paneer butter masala, pasta and completed our course with a filter coffee. It was one of the best dining experience we had.

There are numerous spiritual places like Kukke Subramanya Temple, Shringeri Sharadhamba Temple, Kollur Mookambiga Temple and Murudeshwar temple and greenic places like Madikeri (Coorg) that are located in a close proximity to Udupi.

With happy memories of Sri Krishna darshan, beach adventures and Woodlands dinner, we completed our Udupi visit. and we head to Mangalore, just 90 minutes by bus through Kaup.
Posted by Bharatheeraj at 9:56 AM No comments:

Coffee with Land of Coffee! Chikmagalur!!!

We made our trip to Chikmagalur in Jan 2016. Our plan was to stay in a homestay for a day and see Mullayangiri, Hebbey Falls and Baba Budangiri hills on the next day.

We traveled to Birur from Bangalore via train. It was a 3 hours long morning journey in Hubballi express which started at 6 am in Bangalore and reached Birur by 9.30. The train route was mostly through rural areas with farms and small hills. We had our breakfast at Preethi Canteen in Birur. It was a small food outlet with considerable crowd, probably because it was Sunday. We took a bus to Chikmagaluru from Birur bus stand. There were frequent buses in the route. It was a 90 minutes journey through areca nut and pepper farms in a hilly background. There were hardly few villages in between the two places.

We reached Chikmagaluru by 12. And the place was quite different from my imagination. I expected the town to be a typical hill station. But Chikmagaluru looked more of a town in plains. The climate was little hot for January and the town is very active with people everywhere.

We headed directly to our home stay in Mudigere called Nesting Grounds in a cab. It was a bumpy ride through Coffee Plantations. Nesting Grounds is owned by Mr.Nandu and is located amidst 50 acres of his coffee plantation in a hill.

The house is well maintained and every minute detail is taken care with utmost care. There is a television and other indoor games option to pass the time. But we spent our time exploring the plantation.

Immediately upon arrival we had our lunch prepared by Mr.Parameswar. It was a mix of Malnad cuisine and typical south Indian cuisine like Chicken Briyani. It was a tasty lunch. Post lunch we went on a long walk on the hills. It was coffee harvesting season and we could see workers bringing the collected beans to the storage area. We have seen a beautiful sunset from the house, tasting our evening coffee. Once the place is dark, we spent our time inside the house playing carom and business. And when it was time for dinner, Parameswar brought tasty chicken gravy made in Malnad style, roti, rice, rasam and other items. The dinner was very delicious. The place was so dark and calm in the night. And the night was reasonably cold. We had a good sleep in our rooms.

The second day of our Chikmagaluru trip started with a guided tour inside the Coffee plantation by Mr.Nandu. He showed us many varieties of trees and enlightened us about history of Coffee,  its life cycle and challenges of coffee plantations. We were accompanied and guarded by Nandu’s 7 dogs.

After coming back to the house, we had our breakfast. Akki roti with vegetable kurma, appam with coconut chutney, bread, butter and jam filled our tummy. We had special coffee after our breakfast. The house offered us a pleasant stay and wonderful hospitality by Nandu and his team. And Nandu offered us complimentary coffee powder. And we also tasted the local made wines from banana, pedal leaves, ginger and coffee. We chose to buy a bottle of banana wine. We didn’t want to leave the place. But due to time constraints, we decided to leave and begin our sightseeing around Chikmagaluru.

We directly headed to Mullayangiri hills. It is the highest peak in South India. The road leads to the hill top offered wonderful view of Chikmagaluru hills.

Reaching the peak involves around 700m of trek through the steps. The sight from the peak is mind blowing and one could get a 360 degree view of the hills. There is a small temple-mutt in top of the hill. It is a must visit place in Chikmagaluru.

The roads to Hebbey Falls was closed by Forest department. So we headed to baba budangiri. There is a shrine named after sufi saint Baba Budan. There is an interesting story for naming the mountains after him. Coffee was originated in Ethiopia and Spread in Yemen in Arabia. Arabians strictly controlled the coffee trade and traded only the roasted beans or powder. But Baba Budan while coming back to India after his holy travel to Mecca brought 7 coffee beans to India and sowed it in the Chikmagaluru Mountains. And that’s the beginning of Coffee plantations in India. We visited the shrine, which is actually inside a cave. And the rocks are coated with sandal. So the entire place was gave a divinely feel.

There is a small falls called Manikyadhara falls around 4 km from the Baba Budan shrine. The place offered beautiful view of western ghats. There were dozen shops selling snacks, herbs and local produces. Visitors have to be little careful with the monkeys near the falls.

After Manikyadhara falls we directly headed to chikmagaluru with few stoppings in between.

We had a quick dinner and taken last bus to Shringeri. We couldn’t cover many places like Kemmangudi, Cofee musuem and couldn’t dine at Hotel Mayura as we planned due to time shortage and leaving those places for our next visit to Chikmagaluru.

Bye Bye Chikmagaluru.. Lets meet again..
Posted by Bharatheeraj at 10:37 AM No comments: